'Looking After a Legacy' Art Exhibition 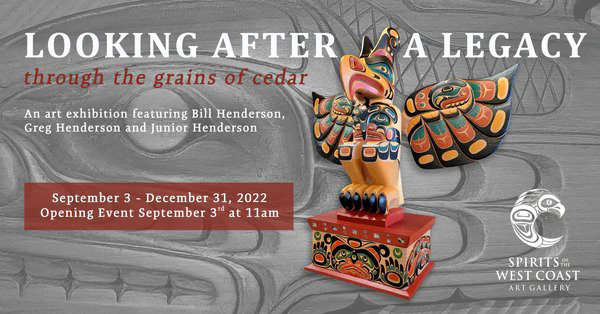 Spirits of the West Coast Art Gallery is honoured to present “Looking After a Legacy: Through the Grains of Cedar”, an art exhibition featuring carvings by renowned Kwakwaka’wakw artists Bill Henderson, Greg Henderson and Junior Henderson of the Wei Wai Kum First Nation.

More Information (CKCC The Raven 100.7 is not responsible for external websites)

Spirits of the West Coast Art Gallery is honoured to present “Looking After a Legacy: Through the Grains of Cedar”, an art exhibition featuring carvings by renowned Kwakwaka’wakw artists Bill Henderson, Greg Henderson and Junior Henderson of the Wei Wai Kum First Nation in Campbell River, BC. This exhibition is rooted in the profound desire by the artists to carry on the legacy of their father and grandfather, Master carver Sam Henderson. Sam lived his life dedicated to the preservation of Kwakwaka’wakw knowledge and culture, and used the practice of carving to preserve these ancient traditions. It is a legacy he has left behind for the next generation of carvers.

Sam Henderson was born in 1905 and grew up as part of the ‘Nak’waxda’xw First Nation in Blunden Harbour, BC. In 1934 he moved to Campbell River and married May Quocksistala, the eldest daughter of the local Wei Wai Kum Chief. When Sam moved to Campbell River the culture in the area was nearly lost. Sam, having been raised and immersed in the old potlatch ways, brought the ancient traditions of the ‘Nak’waxda’xw people with him and helped restore culture to the area. He and May were devoted to keeping their cultural heritage alive, and they instilled these traditions into their 17 children.

The Henderson family to this day is a highly respected family of the Wei Wai Kum First Nation. Bill Henderson, son of Sam Henderson, is a Master carver in the art of “making wood speak”, and was taught alongside his brothers Ernie, Dan, Mark, Tom and John, how to carve from their father. From an early age Bill would sit and watch Sam, who before teaching Bill how to carve, first taught him how to make his own carving tools. Today Bill is a world-renowned artist, and his carvings sit in collections around the globe. Bill has followed his father’s path by sharing the tradition of carving with the next generation, including his nephews Greg and Junior Henderson. Greg and Junior -  esteemed carvers in their own rights – join Bill in this exhibition as a showcase of how traditions are passed down and carried forward.

From a young age Greg was taught the importance of his culture, and learned the art of carving from his father, the late Ernie Henderson, and from his Uncles Bill and Mark. Greg is proud to be a third-generation carver and carry on the legacy that his grandfather set forth.

A feature piece in the exhibition is the “Guardian of the Gildas” totem pole carved by Junior Henderson. The piece was inspired by a totem pole that his grandfather Sam had carved for the Campbell River Museum. “I try to mimic my life to be like my grandfather” says Junior. The totem pole stands 5 feet in height, and depicts a Thunderbird guarding a box of the family treasures. Junior devotes his life, like his grandfather, to the preservation of his heritage, to the practice of carving, and to honouring the potlatch system - a system of give and take. While Junior is a third-generation carver who has been bestowed the legacy of his grandfather, he is also looking to pass along the ancient traditions to the next generation. Junior mentors young artists, like K’omoks artist Karver Everson and Kwakwaka’wakw artist Talon George, in the practice of carving. “It’s important that we give back to our culture, not only to our own families, but to the families that are out there that need help, and if we can be there for them, we will be stronger in the end and for the next generation”.

Looking after a Legacy is presented in a physical and virtual format. The exhibition and sale will be open to the public from September 3rd to December 31st 2022 at 2926 Back Road, Courtenay, BC. The opening event will take place September 3rd at 11am, with the artists on site. Visit our website at www.spiritsofthewestcoast.com and follow us on Facebook and Instagram @spiritsofthewestcoast for the latest news, artist talks and exhibition features.

More details for this venue

The event runs from 10:00am to 5:00pm on the following dates.
Select a date to add this event to your calendar app.